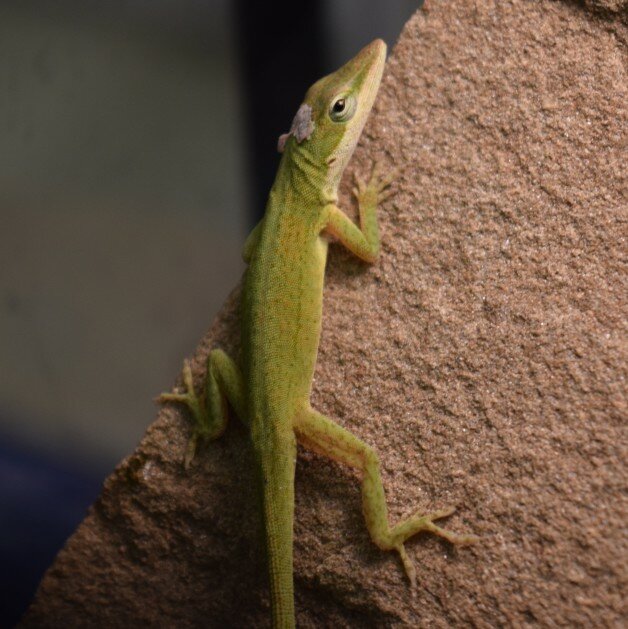 Philadelphia, Boston, New York, Los Angeles, Chicago, the United Kingdom, Israel, India, China, and Singapore–our new mascot has made headlines everywhere! If you want to purchase college research papers on the topic, you're free to look through the examples of finished projects at the main page.

When a lizard was brought into my science lab on Friday, January 22, by a kindergartener named Faye, I hadn’t the slightest idea of the media attention “Green Fruit Loop” might garner. When reporter Cristina Rojas called me on Monday, January 25, not long after we’d dug ourselves out from the winter storm, I thought it might make a cute, local story, and was happy that Riverside Elementary School (and especially our science laboratory) might get some attention. Since the lizard survived harvest and transport thanks to gentle handling and organic farming practices, it was nice that Whole Earth Center let me include their name, and I was also grateful that Faye’s mother had a chance to speak with the press, since I remember getting into the newspaper as a kid. Unfortunately, my first experience with the Philadelphia Inquirer came immediately after the disaster of space shuttle Challenger, but I nevertheless thought it was neat to see my name in print!

On Monday afternoon, I uploaded my short video of Green Fruit Loop munching on a cricket, and that evening, I gave the little anole a nice spritzing with water, since it looked like he was getting ready to shed.

And then Tuesday came.

It started with a request from the NY Pictures desk of DailyMail.com, which I received right before classes started that morning. With a full schedule to teach in my science lab, I sent a brief response that it was fine. Here is the article that followed:

At the same time, and unbeknownst to me, the front office of Riverside School was getting flooded with media requests. News these days really does travel at (almost) the speed of light, so by the time I checked my email after teaching three classes straight, Buzz60, Inside Edition, and Good Morning America had all tried to contact me. Here are the two videos and news story that followed:

I had a great time corresponding with Avainne Tan of ABC News!

Once the action started rolling, I then began to hear from news stations in Boston and Philadelphia. First came WHDH 7 News in Boston; my first television appearance (on Facetime, while I held up my cell phone, since we weren’t able to get our Skype accounts properly connected). To watch, just click on the link below:

Next came Channel 6 Action News in Philadelphia, which sent a news cameraman to my home, and gave me the chance to answer a few questions:

Actually, the news story above came out before I could be interviewed, but below is a link where I had a chance to speak (and get a mention from Jim Gardner, who is a long-standing news icon in Philadelphia)… although still I find it hard to believe that I actually said “somewheres down south;” I don’t think I’d ever used the word “somewheres” before.

It also appeared on NJTV News:

Many, many international stories started popping up in Google searches:

From the Times of India, under “Mad, Mad World”:

From TodayOnline in Singapore:

From Yahoo! New Zealand (who picked up the Reuters story by Barbara Goldberg):

From Emirates 24/7, which picked up on the original NJ.com story:

Here is a page where the language is primarily German, although a few words are coming out as “Serbian” in Google Translate… even though I’m guessing that “Russland” means Russia. Wish I knew enough of these language to learn more about this website:

The article below came through a Google Translate search of “lizard,” “salad,” and “school,” translated into traditional Chinese:

Although I can’t read Chinese characters, I can see those English words, so I know I’d hit the right story!

On Wednesday, I was late for a teaching workshop on Next Generation Science Standards because I’d heard that the New York Post had put the story on page 2. This was after I’d spoken to Natalie O’Neill the evening before.

This article made it to my literary agent, Liza Fleissig, before I was able to let her know what was happening, swamped as I was with all of the requests to use photos, quotes, etc. Maybe I’ll take Green Fruit Loop with me on the tour for my first children’s novel!

At lunchtime, I had the pleasure of speaking with Rita Giordano of the Philadelphia Inquirer, who wrote a beautiful story and asked lots of great questions. On Thursday morning, this article came out:

And a similar article ran in the Philadelphia Daily News:

From what I’ve heard, this story will also be picked up by the Chicago Tribune; just waiting for confirmation!

On Thursday, I also had a chance to be interviewed for National Public Radio‘s “Wait Wait…Don’t Tell Me!” in their Bluff The Listener segment:

Thank you so much, Peter Sagal, for pronouncing my last name correctly!

This coming Friday, February 5, I’ve also been invited to speak on The Jay Thomas Show on SiriusXM Satellite Radio at 3:00 PM on Howard 101!

Wow, I have covered a lot of news stories already, but I’ll post a few more. Without a doubt, Green Fruit Loop has to be the world’s most famous lizard! Has any other reptile ever made such news?

From WTOP in Washington, D.C.:

From 11 ABC in Raleigh, North Carolina:

From Tampa Bay, Florida–part of the Carolina anole’s natural range:

From News8 in Connecticut (I’m primarily posting this one because I love the lizard photo, although it’s not actually Green Fruit Loop): 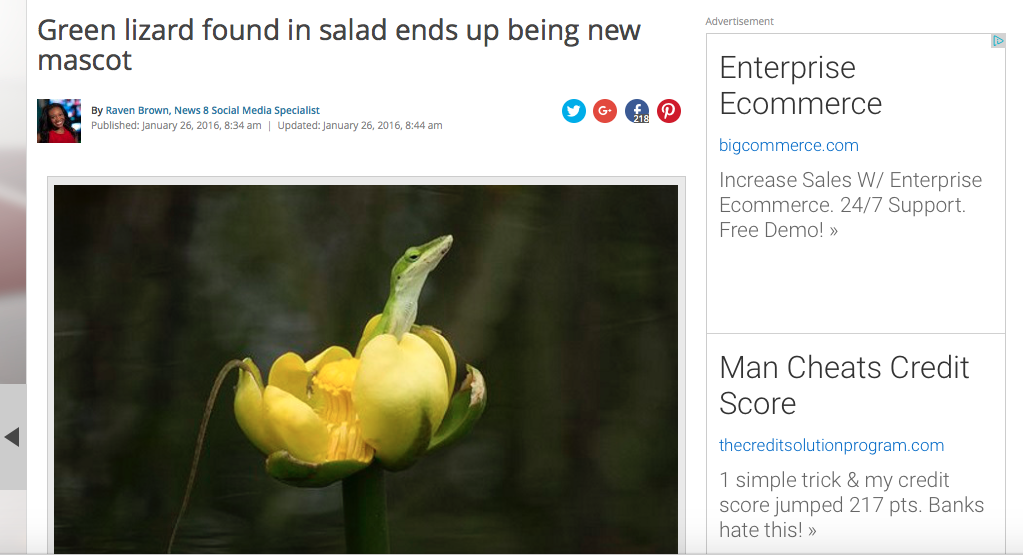 More news surely will come, so I will be updating, but for now, I’ll end this post with a video from NewsBeat Social:

If anybody finds additional stories, please feel free to send them in!